Stu is a real rocker and he wanted an amp dedicated to his articulated style but with simple/intuitive controls and with a “rock” size to fit the taste of loud guys like him on stage. The new Stu Hamm signature amp features both a solid state and a tube preamp with separate level controls offering the clean attack of a solid state and the warmth and grit of a tube in a single unit with the mix option, plus a 7-band graphic EQ to tailor your bass tone to perfection. The massive real power of 1000W from the MPT power amp allows to handle any kind of gigs, no matter how big the stage or how loud the band... this amp is always ready to rock hard!
From a small club to Joe Satriani’s big stage: Rock your sound with the MB STU AMP 1000!

“Markbass has finally given me the sound that I have been looking for! The S.T.U. Amp has beautiful solid state and tube sounds that can also be blended together to create the sound that I need, according to the musical situation.” — STU HAMM

> SOLID STATE AND TUBE PREAMPS
The two MB STU AMP 1000 preamps with separate controls for the solid state and tube, offer a wide range of tone from clean to crunchy overdrive and distortion and everything in between. You can rock your sound from old-school to hard rock or make your own alternative rock tone!

> 7-BAND GRAPHIC EQ
The seven-band graphic EQ is very useful and easy to use to modify your instrument tone. The seven frequencies were chosen to give you total control of your bass tone, even on 5 and 6-string basses. Each band can be boosted or cut over a +/-16dB range.

> 1000W HIGH-POWER / MPT - MARK PROPRIETARY TECHNOLOGY
This high-power head gets amplified by a poweful 1000W MPT power amp, boasting massive supply of power and serious headroom. About all the bass amps on the market use the same power amp from different manufacturers, which are not specifically designed for bass. At Markbass, Marco De Virgiliis invested a lot on R&D to create a proprietary power amp technology, specifically designed to respect and glorify the tone of your instrument.

POWER REQUIREMENT: 100V; 120V; 230V; 240V - 50/60Hz (tension set inside the equipment)
WARNING: The MARKBASS CASA is manufactured to be used in the country where they have been sold, and it is factory preset to that country’s voltage. So make sure you’re sending the correct voltage to your amp before you connect it to the AC power.

NOTE: Product specifications are subject to change without notice.

“Markbass has finally given me the sound that I have been looking for! The S.T.U. Amp 1000 has beautiful solid state and tube sounds that can also be blended together to create the sound that I need, according to the musical situation. And the cabinet is a ground breaking (and lightweight) 2x15 cabinet, that had more clarity and punch than any 4x10 or 8x10 I’ve played.”

In this in-depth interview Markbass top-artist Stu Hamm discusses his new solo-bass album "The Diary of Patrick Xavier" — from the story of the album’s genesis to details about each song.

Be an important part of Stu Hamm's new Solo Bass CD and US Tour, "The Diary of Patrick Xavier".

November 14/16, following his European Greatest Hits Tour 2017, Markbass top-artist Stu Hamm will have a series of clinics in Italy showing the prototype of his Markbass signature stuff!

Markbass top-artist Stu Hamm will be on tour in Europe this Oct and Nov with his band, feat. Jack Gardiner on guitar and Craig Blundell on drums, playing the music that he recorded with Steve Vai, Joe Satriani, Allan Holdsworth, Eric Johnson... as well as his own hits! 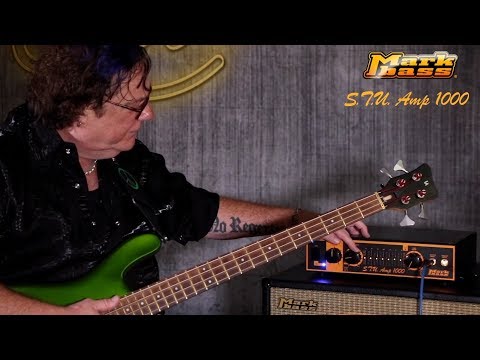